In general, rising hopes about a slowdown in US interest rate hikes by the Federal Reserve contributed to an increase in demand for the yellow metal.

In general, rising hopes about a slowdown in US interest rate hikes by the Federal Reserve contributed to an increase in demand for the yellow metal. The minutes of the last meeting of the Federal Reserve, which were released last Wednesday, provided further evidence that the US central bank is considering slowing the pace of raising interest rates as soon as next month. The minutes said that a “significant majority” of meeting participants judged a slower pace of rate hikes likely to be “appropriate soon”. A slower rate of rate hikes would better allow the Fed to assess progress toward its goals of maximum employment and price stability.

However, the Fed also said that some participants felt that the central bank would need to raise US interest rates higher than previously expected in order to reach a position constrained enough to bring down inflation.

With trading activity remaining subdued after the Thanksgiving holiday on Thursday, US stocks turned underperform during trading on Friday. Despite choppy trading, the Dow ended the session at a new closing high in seven months. The main averages ended the short session amid a clear difference in performance. While the Dow Jones rose 152.97 points, or 0.5 percent, to 3,4347.03, the S&P 500 fell 1.14 points, or less than a tenth of a percent, to 4,026.12 and the Nasdaq fell 58.36 points, or 0.5 percent, to 11,226.36.

In the week the holiday was off, the Dow rose 1.8 percent, the Standard & Poor’s jumped 1.5 percent and the Nasdaq advanced 0.7 percent. The weak performance came in the Wall Street markets as many investors and traders stayed away from their desks in light of the markets holiday.

In the near term and according to the performance on the hourly chart, it appears that the price of XAU/USD is trading within an ascending channel formation. This indicates a significant short-term bullish bias in market sentiment. Therefore, the bulls will look to extend current gains towards $1,767 or higher to $1,776 an ounce. On the other hand, the bears will target short-term profits at around $1,746 or lower at $1,736 an ounce.

In the long-term and according to the performance on the daily chart, it appears that the XAU/USD gold price has recently completed forming the XABCD double bottom pattern before declining. This indicates that the bulls are trying to control the price in the long term. Therefore, they will target extended gains around $1,803 or higher at $1,869 an ounce. On the other hand, the bears will target long-term earnings at around $1,699 or lower at $1,628 an ounce. 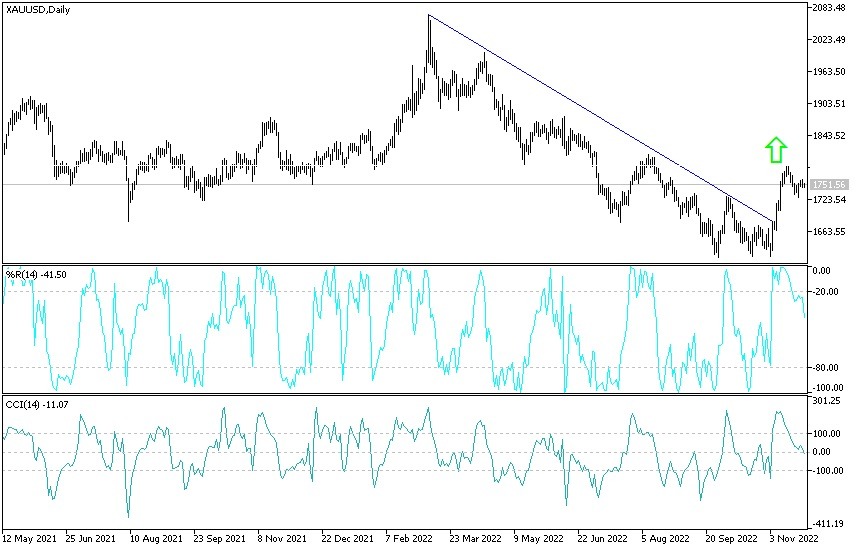 Ready to trade today’s Gold forecast? Here are the best Gold brokers to choose from.