The Eurozone likely experienced the second month of double-digit inflation in November, according to analysts’ expectations ahead of important data that ECB officials await.

The Eurozone likely experienced the second month of double-digit inflation in November, according to analysts’ expectations ahead of important data that ECB officials await. And while the overall pace of consumer price increases is likely to have slowed for the first time in a year and a half, it is still above 10%, as nearly all economists expect. The median of 32 estimates in a Bloomberg survey is a result of 10.4%, official figures to be released this week. So, Marco Valli, Loredana Maria Federico, and Tulia Bocco, economists at UniCredit in Milan, whose forecasts match the average, said in a report: “Head and core inflation is likely to peak early next year.”

The data is pivotal for the ECB as the most up-to-date leading indicator of price pressures ahead of the December 15 decision, and as input to forecasts that policymakers will consider at that meeting. For their part, officials indicated that the unexpected rise could prompt them to raise interest rates for the third time in a row by 75 basis points, while signs of weakness may help build consensus towards a smaller move. Recalling a series of “negative surprises” from such figures in the past, ECB Vice President Luis de Guindos told Bloomberg TV this month that he believed inflation would not subside quickly.

“Over the coming months,” he said, “inflation will hover around the current level, which is slightly above 10%,”he added.

There is a range of a full percentage point between the highest and lowest expectations in a Bloomberg survey.

Core inflation, which strips out volatile items such as energy and food, may have remained unchanged at 5%. The action is also closely watched by officials as a measure of underlying momentum. Eurozone data masks significant differences across the region.

Also due this week are the latest CPI reports from the four largest economies in the region, with Germany currently enjoying the fastest inflation rate. Economists expect it to show a slowdown in all markets except Spain. The European Central Bank’s chief economist, Philip Lane, in an interview with Market News, highlighted how different energy systems affect national data. He said Spain’s previous adjustment to higher prices means inflation is already weakening there, and others will follow.

“Sooner rather than later, the accumulating corridor will turn into downward pressure,” he said “But let’s see if the summit will be on this side of Christmas or the other,” he added.

As I mentioned before, the price stability of the EUR/USD will remain above the 1.0400 psychological resistance. This supported the bulls’ domination of the trend, taking into consideration the movement of technical indicators toward overbought levels. Therefore, I would prefer to sell the EURUSD from the resistance levels of 1.0465, 1.0520, and 1.0600, respectively.

The euro is still facing weakness factors led by the continuation of the Russian-Ukrainian war. On the other hand, according to the performance on the daily chart, it will be important to test the 1.0285 support level for the bears to regain control. 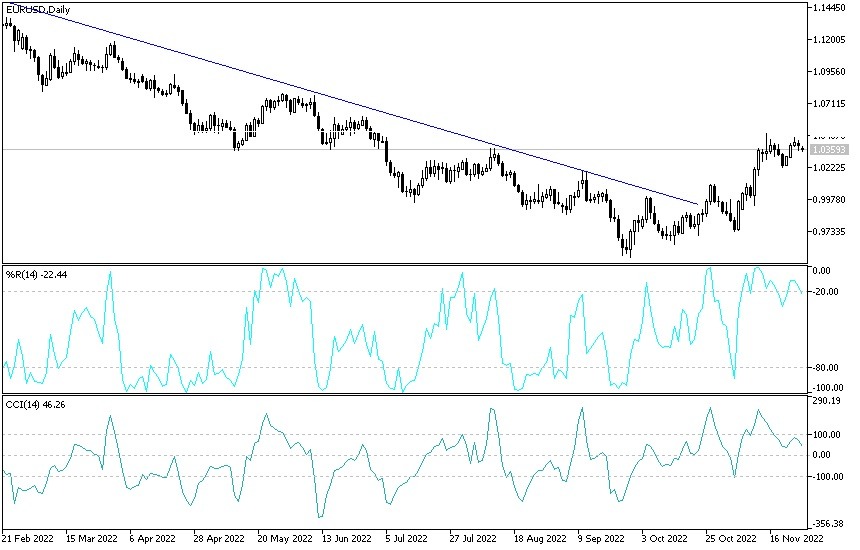 Ready to trade our Forex daily forecast? We’ve shortlisted the best Forex brokers in the industry for you.

The Index Extends its Gains