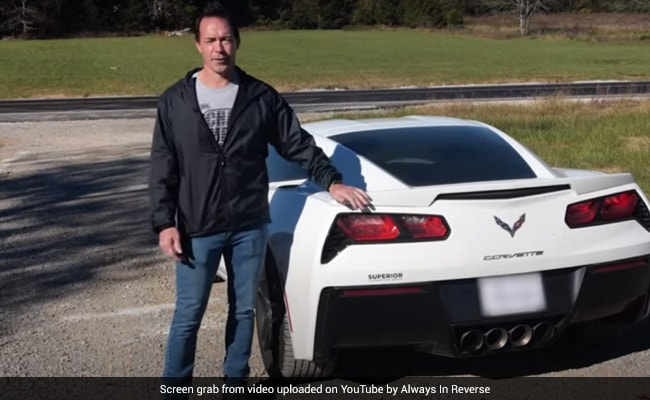 Scot Burner drove a Corvette in reverse for the record.

A man has broken the Guinness World Record of driving a sports car in reverse. Scot Burner drove a 2017 white Corvette in reverse for over 1.6 km for 75.18 seconds, which was captured on camera and shared on the Facebook page of NCM (National Corvette Museum) Motorsports Park, according to Fox News. By doing so, he beat the previous record of 97.02 seconds. Mr Burner is based in Nashville, Tennessee, and hosts a YouTube channel called ‘Always in Reverse’ where he is seen driving cars backward to see what their top speed is, the outlet further said.

The record-breaking attempt was done on June 15 and certified recently by Guinness officials after analysing the video and data collected.

Mr Burner has posted the certificate he received on his Instagram page. “Endless bragging by me. My Guinness World record is officially official!” he said in the caption.

Mr Burner acknowledged his hobby is unusual and said he started driving cars in reverse in the year 2000 when he purchased a Honda S2000 sports car.

“I had to back it up a long distance and was able to get it up to 47 mph. I thought, ‘well, that was fun,’ then I tried the cruise control and was surprised to find that it worked,” Mr Burner told Fox News.

He decided to try and break the existing record after discovering that he had already unofficially beaten the time, UPI said in a report. But it took Mr Burner two years to ensure all Guinness World Records rules would be followed in his attempt.

200 Rescued From Drifting Ice While Fishing In US Lake