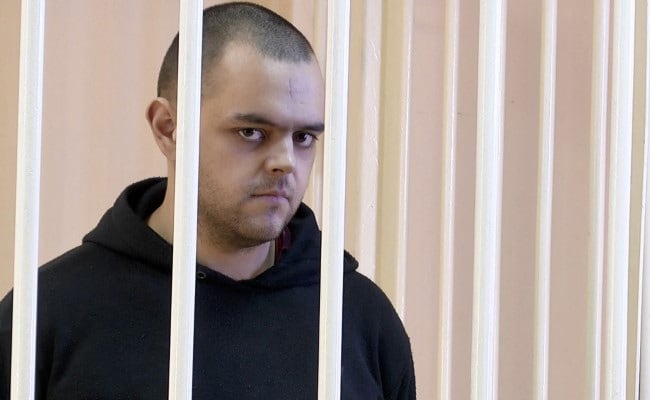 Aiden Aslin was living in Ukraine and serving in its Marines when Russia invaded in February.(FILE)

A British man freed from captivity in east Ukraine in a prisoner swap told Sunday how his captors stabbed him in the back and forced him to sing the Russian national anthem.

Aiden Aslin, who was freed and flown to Riyadh Wednesday with four other Britons held by Russian proxies, told The Sun in his first interview back in the UK that interrogators tortured him, promising him a “beautiful death”.

Aslin, 28, from Nottinghamshire in central England, was living in Ukraine and serving in its Marines when Russia invaded in February.

He was taken prisoner while fighting for Kyiv and sentenced to death in June by Russia-backed separatists in Donetsk in eastern Ukraine, charged with being a mercenary.

Aslin told The Sun he was repeatedly beaten with a truncheon during interrogation and at one point fell to the floor after being hit on the forehead.

An officer knelt by him and told him in Russian: “I am your death,” he said.

“He pointed to my back. He showed me his knife and I realised he’d stabbed me,” said Aslin, who posed showing multiple scars on his back.

His captor then asked him if he wanted a quick death or a beautiful one, Aslin said. He responded a “quick death” and the man replied: “No, you’re going to have a beautiful death.”

‘Treated worse than a dog’

Aslin said he was held in solitary confinement in a tiny cell with lice, cockroaches and no daylight and “treated worse than a dog”.

The tabloid wrote his captors “played the Russian national anthem on a loop and ordered him to stand and sing it or be beaten again.

When they flipped open the grill of his cell, he was ordered to yell: “Glory to Russia.”

Aslin tweeted Sunday: “After being forced to sing the Russian anthem every morning for the past 6 months I think it’s time to learn something a bit better and learn the Ukrainian anthem.”

He praised the role of Russian former Chelsea Football Club owner Roman Abramovich, however, telling The Sun: “I want to thank Mr Abramovich from the bottom of my heart. I’m here today because of him and not in that horrible place.”

Abramovich appeared as the men boarded a plane to Riyadh and shook Aslin’s hand, he said, confirming earlier reports.

The ally of Russian President Vladimir Putin has been sanctioned by Britain and the European Union.

Iranian Expats in Iraq Divided Over End of ‘Morality Police’