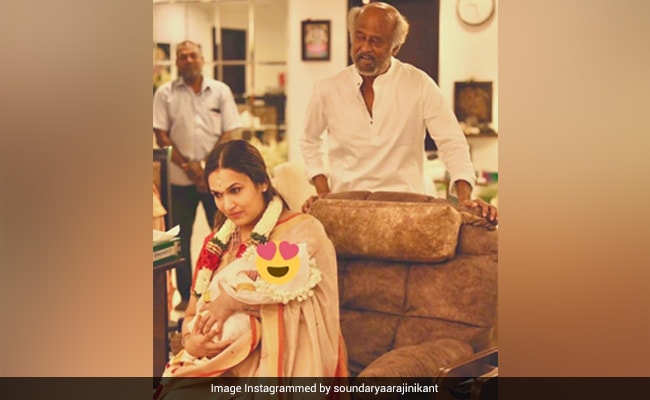 Soundarya Rajinikanth, who celebrated her 38th birthday on Tuesday, shared a precious family picture a day later on her Instagram profile. On Wednesday evening, she posted a picture of herself with her son Veer and her father and legendary actor Rajinikanth. She captioned the post: “To every person who took time to wish me on my birthday yesterday. Thank you so so so much… Gods have blessed me with the best gift this year, my Veer, papa and having this amazing God’s child behind me always. Life is a true blessing.”

Earlier this month, Soundarya announced in her Instagram post that she and her husband Vishagan Vanangamudi welcomed a son together. Sharing pictures from her pregnancy diaries, she wrote: “With gods abundant grace and our parents blessings… Vishagan , Ved and I are thrilled to welcome Ved’s little brother Veer Rajinikanth Vanangamudi today 11/9/22. A huge thank you to our amazing doctors.”

This is what Soundarya posted:

Soundarya Rajinikanth married Vishagan Vanangamudi in February, 2019. Soundarya, who has worked as a graphic designer in the film industry since 1999, has also directed films such as Kochadaiiyaan and Velaiilla Pattadhari 2. She was previously married to R Ashwin, with whom she has a 7-year-old son named Ved.

Rajinikanth was last seen in Annaatthe, which released on Diwali last year. Besides Rajinikanth, the film featured Nayanthara and Keerthy Suresh. The veteran actor’s next project is filmmaker Nelson’s Jailer. Rajinikanth married Latha on February 26, 1981. The couple are also parents to Aishwaryaa, who is a filmmaker.

"Not Worth It": Salman Butt's Scathing Criticism Of Bhuvneshwar Kumar After India's Loss To Australia In Mohali T20I

Tabu, Sanya Malhotra And Others At Babil Khan And Tripti Dimri’s Qala Screening

Shah Rukh Khan Wraps Up Saudi Arabia Schedule Like This