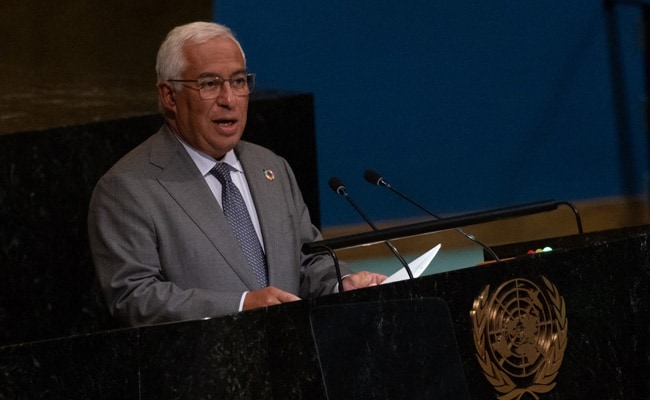 Portuguese PM Antonio Costa was addressing the 77th session of the UNGA.

Portuguese Prime Minister Antonio Costa on Thursday called for UNSC reform that should include representation of India, Brazil and Africa continent at the UN Security Council.

Addressing the 77th session of the United Nations General Assembly, PM Costa advocated for a Security Council that incorporates a comprehensive view of security and gives fair representation to small countries.

“We need a representative, agile and functional security council that is able to respond to the challenges of the 21st century without being paralyzed and whose actions are scrutinised by the other members of the United Nations,” he said.

“A security council that incorporates a comprehensive view of security. A security council where the African Continent, Brazil and India have seats. And where small countries are fairly represented,” he added.

During his address, the Portuguese PM said many children and adults globally have never known peace. “In Europe, we are confronted with an unjustified and unprovoked invasion of Ukraine, in a flagrant violation of international laws, primarily the charter of the United Nations Nations.”

“We therefore cannot fail to condemn the Russian aggression and here to reinforce Portugal’s support sovereignty and territorial integrity of Ukraine. Russia must cease hostilities and allow the creation of a sustained ceasefire and peace-oriented dialogue,” he said.

PM Antonio Costa welcomed the efforts of the United Nations, particularly the UN Secretary-General Antonio Guterres, to resolve this conflict and mitigate its damaging effects such as the food crisis.

Portuguese PM’s call for UNSC reform came the same day as the Group of Four (G4) foreign minister met and expressed concern at the continued lack of meaningful progress in the Inter-Governmental Negotiations (IGN) on Security Council (SC) reform. They also renewed their determination to work towards commencing text-based negotiations without further delay in the IGN.

On September 22, the Foreign Ministers of the G4 countries, Carlos Alberto Franco Franca, Foreign Minister of Brazil, Annalena Baerbock, Federal Foreign Minister of Germany, S Jaishankar, External Affairs Minister, and Yoshimasa Hayashi, Minister for Foreign Affairs of Japan, met in the margins of the opening of the 77th Session of the United Nations General Assembly, to exchange views on reform of the UN Security Council.

In a joint press statement after the meeting, the G4 Ministers assessed that conflicts around the globe as well as increasingly complex and interconnected global challenges have brought to the forefront the urgency of reforming the United Nations and updating its main decision-making bodies.

They agreed that the inability of the Security Council to effectively address these challenges vividly demonstrates the urgent need for UN Security Council reform in order to better reflect contemporary geopolitical realities, and to enhance its effectiveness and the legitimacy and implementation of its decisions.

The Ministers expressed disappointment at concerted attempts to stall this process, and renewed their commitment to addressing the issue in a decisive manner and with increased urgency in the 77th Session of the UNGA.

The Ministers agreed on the need for enhanced role and presence of developing countries and of major contributors to the United Nations to enhance the capacity of the Council to respond effectively to the complex and evolving challenges the world faces today on questions of international peace and security.

(This story has not been edited by NDTV staff and is auto-generated from a syndicated feed.)