Gold markets will continue to be very noisy, but what’s interesting about this past week is that we almost did nothing. After all, the previous week had been extraordinarily bullish based upon the CPI numbers coming in a little lower than anticipated in the United States, but there was actually no follow-through. What does this tell me? It tells me that there is not a whole lot of faith in the idea of the Federal Reserve slowing things down. In fact, James Bullard has said just in the last 24 hours that people need to get used to the Federal Reserve being “higher for longer.” In this environment, I suspect that the next move for gold is lower, although I’m not calling for some type of meltdown. 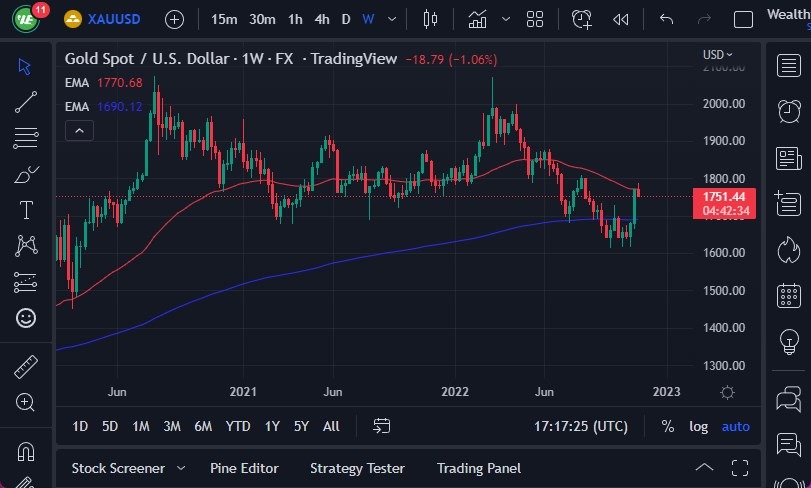 The West Texas Intermediate Crude Oil market has fallen rather hard during the course of the week, to slice through the $80 level. At this point, it looks like traders are starting to focus on the idea of a lack of demand, as economies around the world continue to struggle. If we break down below the lows of last month, it’s likely that this market will continue to drift toward the 200-Week EMA. After that, it could open up a move all the way down to the $60 level.

More likely than not, we probably will get some type of bounce, but bounces will almost certainly present fading opportunities for those who are willing to short this market. 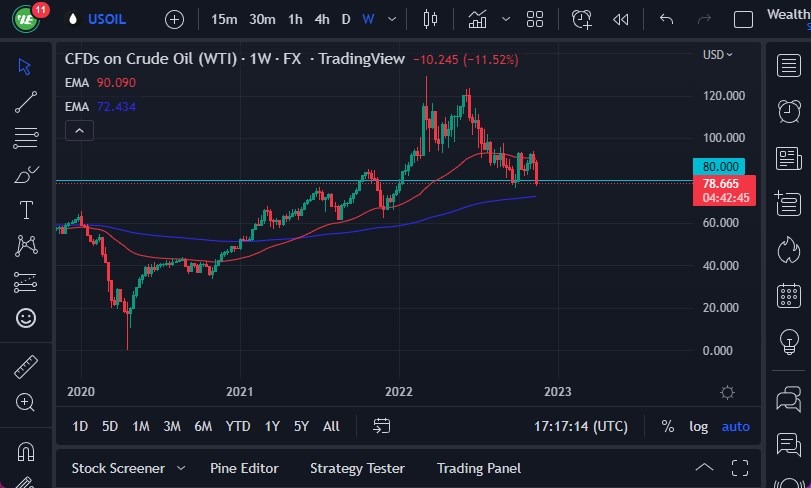 Bitcoin has had a slightly positive way, which in and of itself is a bit of a victory, due to the fact that the world is still reeling from the FTX blowup, and the potential of Genesis doing the same. Nonetheless, the previous candlestick was much longer than the one this past week produce, so I think there is still downward momentum. Fading rallies that show signs of exhaustion will be the way that I think a lot of traders will be approaching the market. At this point, we could go down to the $15,000 level rather quickly. 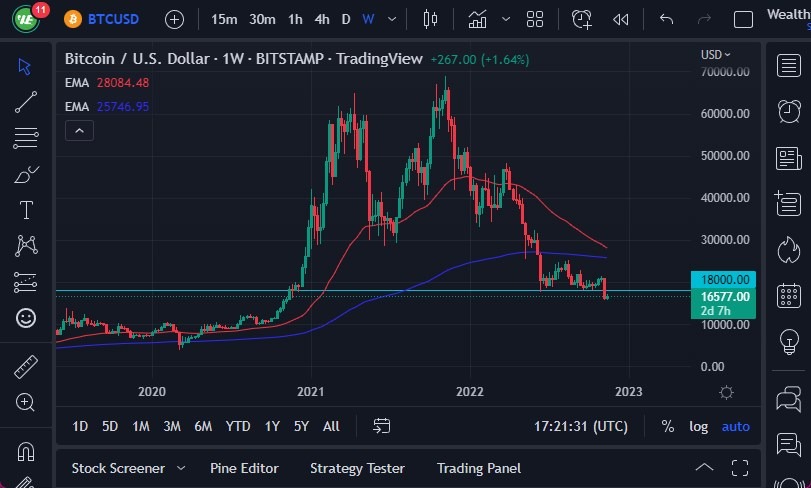 The AUD/USD has rallied initially during the trading week, but it looks as if we are going to continue to see negativity. At this point, the weekly candlestick ended up being a bit of a shooting star, and that suggests that we are going to continue seeing downward pressure. The 0.67 level was an area that I thought we could go looking to reach, which we have now done. Whether or not we can continue to go higher is a completely different question, and I think breaking down from here makes quite a bit of sense, especially if yields in America continue to rise. The 0.65 level underneath could be the target. 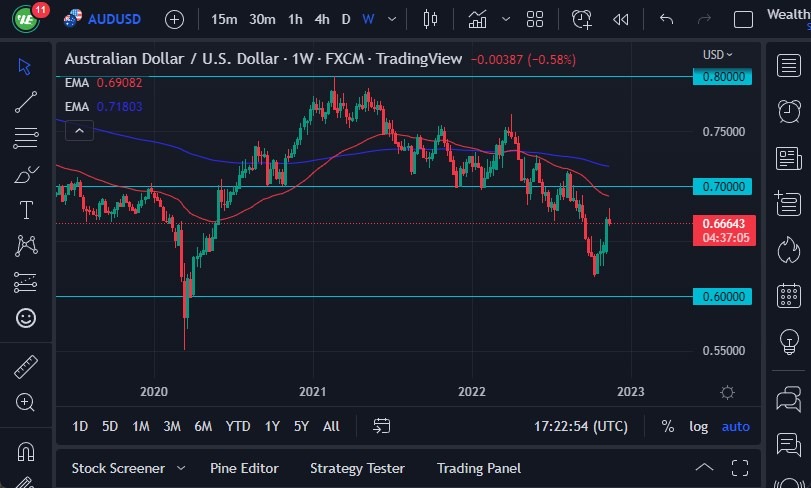 The GBP/USD initially tried to rally during the week, piercing the 1.20 level. The 1.20 level is a large, round, psychologically significant figure, and an area where people would be paying close attention to. The fact that we ended up forming a shooting star here, just as we did in the Australian dollar, suggests that we are ready to go much lower. If we break down below the bottom of the candlestick, then it’s possible that the British pound could go looking to the 1.15 level yet again. At this point, that does make a certain amount of sense considering all of the recessionary headwinds that we have in the United Kingdom. 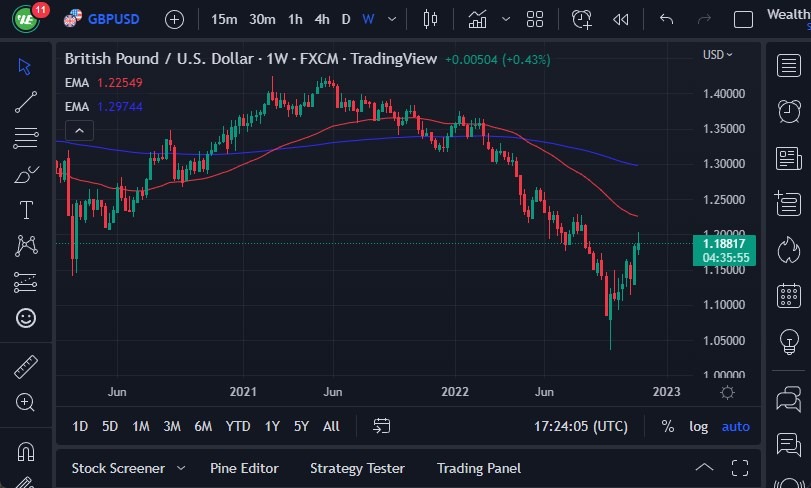 The USD/JPY has bounced a bit against the Japanese yen, as we are trying to stabilize at what could be thought of as a potential trendline. Nonetheless, the ¥140 level will cause a bit of noise. Ultimately, the huge red candlestick from the previous week suggests that we could go lower, but at this point it’s going to be about the Bank of Japan. The Bank of Japan is going to continue to see the need to fight interest rates from everything they are saying, so I think it’s probably only a matter time before we turn around and continue the uptrend. 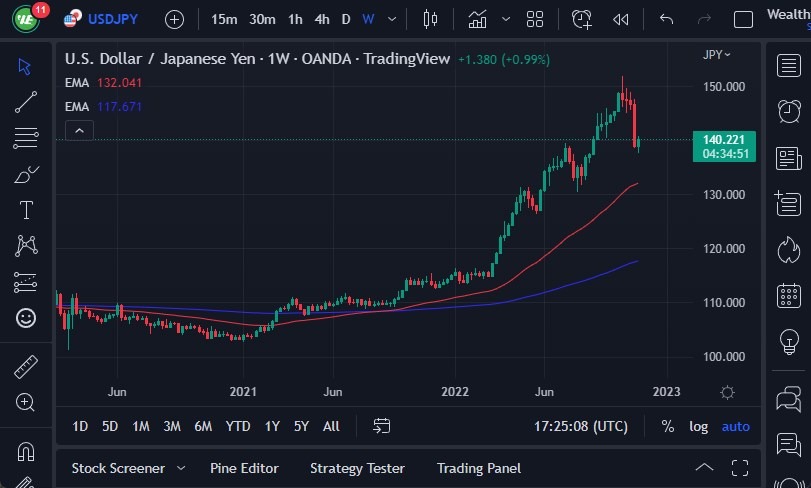 The US dollar has bounced a bit during the trading week, as we have tested previous resistance, and now it looks like the Canadian dollar may be on its back foot, especially as the crude oil market continues to struggle. If oil continues to fall like it has this past week, that makes a lot of sense that we would see the US dollar reach toward the 1.40 level over the next several weeks. At this point, I think short-term pullbacks will end up offering short-term buying opportunities in a grind higher. 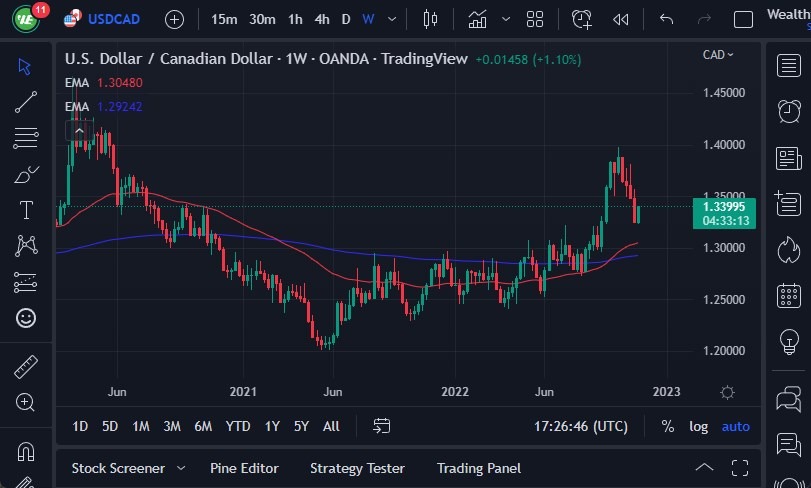 The S&P 500 had initially tried to rally during the course of the week but found a lot of trouble at the 50-Week EMA. By doing so, it shows that the market is running out of momentum, and much like the gold market, it must be noted that we had a massive surge higher after the CPI figures from last week, and then simply went nowhere. What this tells me is that there is a real threat to the downside at this point. Breaking below the 3900 level opens up new short positions in my account. 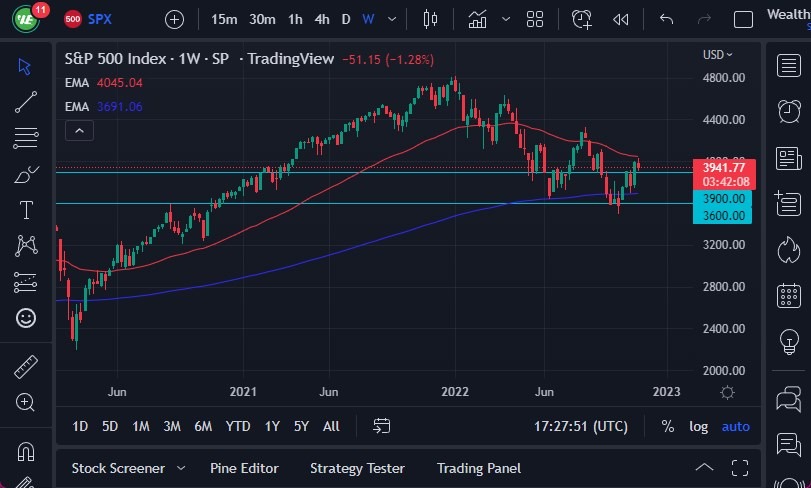 Ready to trade our weekly Forex forecast? Here are the best Forex brokers to choose from.