The NASDAQ 100 has had a very noisy month of November, as risk appetite is all over the place. It’s worth noting that the 12,000 level has offered a bit of resistance, so it’s not a huge surprise to see that we are trying to pull back as we head into the month of December. That being said, the question at this point is whether or not we are going to try to save the market in the last month of the year, or if we are going to fall apart.

To begin with, Core PCE comes out on the first day of the month, which is the Federal Reserve’s favorite indicator for inflation. If it comes in hot, that will almost certainly be negative and we will probably spend the majority of the month trying to break it down. We also have the jobs number coming out on the second, and that of course has its own issues that come with it. Finally, we have the Federal Reserve interest rate decision, which will have everybody holding their breath because Wall Street seems to be positioned for a 50 basis point height, but the threat of a 75 basis point rate hike is still very real.

There’s always the “Santa Claus rally” that can come into the picture when money managers try to buy anything they can in order to make it look like they own the correct stocks or assets. That typically means that we get a bullish end of the year, but that doesn’t necessarily mean that it has to be. For example, 2018 was very negative. Ultimately, it’s likely that this market ends up being very choppy for the month, and I don’t think that we leave the overall consolidation that we are in, basically between 10,000 and 12,000.

Ready to trade our NASDAQ 100 forecast for the coming month? We’ve shortlisted the best Forex brokers for CFD trading in the industry for you. 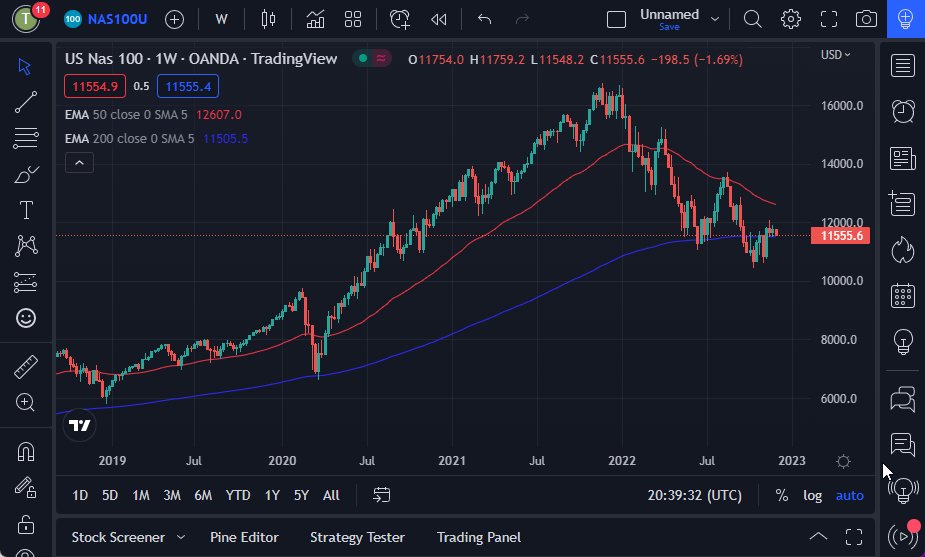