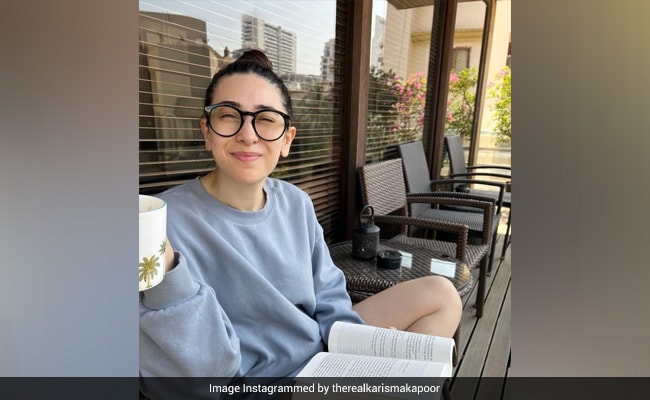 They say Sunday is a fun day and we all agree. Well, we aren’t alone here. It seems Karisma Kapoor relates to us. But her definition of a “Happy Sunday” is slightly different. It is all about coffee and a good book. The actress has shared the information on Instagram with a beautiful picture of herself. Here, she is sitting on a chair with a cup of coffee and a book. The caption read, “Coffee + Good book = Happy Sunday.” For the hashtag, she wrote, “Sunday Chills.” Karisma’s BFF Amrita Arora couldn’t stop herself from rushing to the comments section and dropping a “Hey cutesy” note. Director Farhan Akhtar spoke on behalf of all of us and called it the “best plan”. Author Priyanka Sharma dropped a cheeky note. Referring to her latest novel All the Right People, she said, “Hope it’s All the Right People.”

A few days back, Karisma Kapoor shared a throwback moment featuring herself and her nephew Jeh on Instagram from their time in London. Sharing the wonderful memory, the actress wrote, “Best memory with my best boy.”

Karisma Kapoor then dropped a stunning sun-kissed picture of herself and wrote, “Let the beauty of sunrise keep your heart warm.”

Karisma Kapoor, during her stay in London, also spent some quality time with her sister, actress Kareena Kapoor, who was shooting for her upcoming film with Hansal Mehta. Giving us a sneak peek into her “bonding time”, Karisma wrote, “This is the season already.”

Karisma Kapoor will next feature in Brown: The First Case. It is based on the book City of Death by Abheek Barua. The upcoming project is directed by Abhinay Deo. Veteran actress Helen is also part of it.