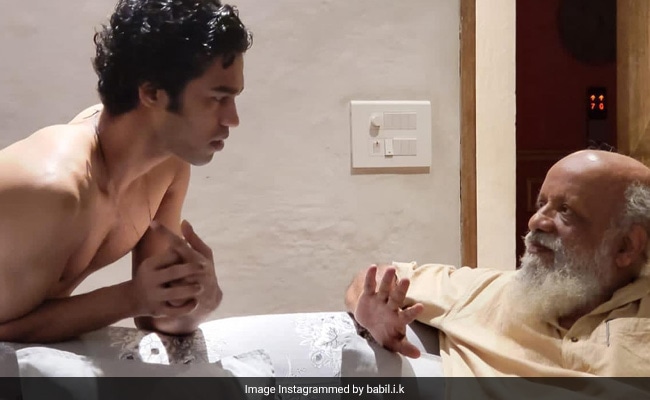 Irrfan Khan’s son Babil Khan made his Bollywood debut with the Netflix film Qala which released on December 1. The latest post on his Instagram timeline features glimpses of his special meeting with noted theatre director “Prasanna sir” who was Irffan Khan’s mentor. Babil posted a few more throwback gems which featured Prasanna, Irrfan Khan, and his wife Sutapa Sikdar. There’s a video as well that shows Prasanna and Babil discussing some nuances of acting. It doesn’t end here. The Qala actor also attached a heartfelt note alongside. He tried to encapsulate his recent experiences in a detailed caption.

Babil wrote, “For the first time, in recent days, I experienced the other side of being an actor. The commerce of it, the promotion of yourself. Although I obliged it with sincerity and honesty, it was something that didn’t feel true to me. It was difficult because the idea of feeding your own narcissism made me feel dissociated with the spirituality of ‘acting’ as an art form. I begged to life itself, I sought within myself and I cried one night, I said “please show me a way to stay true to myself.” A few days later, Prasanna sir came to our house (one of the greatest acting teachers, baba’s most significant mentor) and discussions with him brought me closer to my roots, I felt closer to my art. I believe that if we think of life as a dear friend and wish for changes within one’s self, life will revert to you, stay close with you and provide you with opportunities to evolve. I believe that life is your one true friend.”

Seems like Babil Khan’s post went well with many other actors. Actress Dia Mirza commented, “So true. And so true,” with two heart emojis. Actress Tillotama Shome also wrote, “How wonderful Babil. Promotions are very hard indeed; you are asked to explain the unexplainable.” To this, Babil replied with laughing and two hearts emojis.  Actor Manav Vij commented, “Lovely.”

Previously, Babil Khan shared the trailer of Qala, on Instagram. “Anvitaa Dutt’s 2nd world coming to you on 1st December only on Netflix!” wrote Babil.

Scenes From The Cirkus Trailer Launch With Ranveer And Others

Ahead Of Finale, Priyanka Chahar Choudhary Gets Emotional After Watching Her Journey Clip