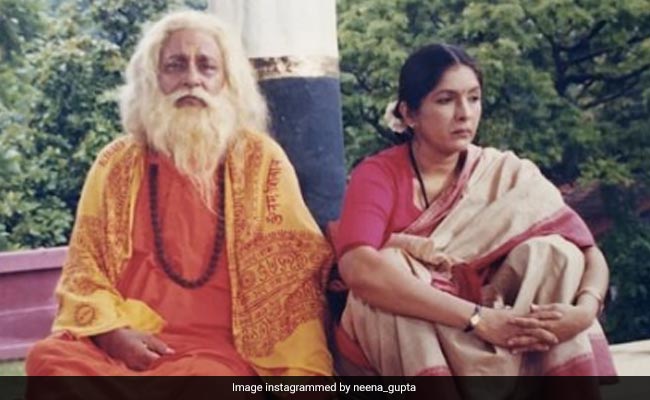 Veteran actor Arun Bali died on Friday at his Mumbai residence. He was 79. His last film Goodbye opened in theatres today. Neena Gupta, who also features in the newly released film, has shared a heartwarming note for Arun Bali on Instagram. The actress has picked a throwback picture featuring herself and Arun Bali from the sets of the hit daily soap Parampara. It was her first day on the sets. “Goodbye, Arun Bali. My first day of shoot on the Parampara series set years ago with Arun Bali. So glad we got to shoot recently for Goodbye,” she wrote. Goodbye, which marks Rashmika Mandanna‘s Bollywood debut, also stars Pavail Gulati, Sunil Grover and Elli AvrRam. It is directed by Vikas Bahl.

Goodbye actor Amitabh Bachchan’s son Abhishek has extended his condolences on social media. He tweeted, “Very sad to hear of the passing of Arun Bali Ji. A wonderfully warm and loving man. Had the pleasure to share screen space with him on several films. My condolences to his family. Om Shanti.” Abhishek and Arun Bali worked together in Manmarziyaan.

“My father left us. He was suffering from Myasthenia gravis. He had mood swings for two-three days. He told the caretaker he wanted to go to the washroom and after coming out he told him he wanted to sit down and he never got up then,” he was quoted as saying.

Arun Bali was suffering from Myasthenia gravis, an autoimmune disease caused by a communication failure between nerves and muscles, for which he was admitted to a hospital early this year, reported the news agency PTI.  “My father left us. He was suffering from Myasthenia gravis. He had mood swings for two-three days. He told the caretaker he wanted to go to the washroom and after coming out he told him he wanted to sit down and he never got up,” his son Ankush was quoted as saying.

Arun Bali started his career as an actor in television with Lekh Tanson’s Doosra Keval. He was known for his performances in TV shows such as Chanakya and Kumkum – Ek Pyara Sa Bandhan.

The actor also had a successful career in movies. His recent films include Laal Singh Chaddha and Samrat Prithviraj.

His works in some movies from the 80s and 90s such as Saugandh, Raju Ban Gaya Gentleman, Khalnayak, Satya, and Hey Ram are still remembered by his fans.

Arun Bali is survived by a son and three daughters.

“We All Became Actors Because Of Him”

Shah Rukh Khan, Priyanka Chopra And Other Stars Lit Up The Red Carpet Like This