The EUR/USD exchange rate entered this important week’s trading stable below the parity rate. The EUR/USD faces risks related to the US interest rate decision on Wednesday by the Federal Reserve, although there may be an unacceptable possibility that the latter will lead to stronger lifting events from expectations. The EUR/USD pair may remain around its current path until the final decision. The pair is stable around the 0.9920 level at the time of writing the analysis.

The single European currency rose sharply at the opening of trading last week with an attempt to recover the 1.02 resistance amid the price movement which many analysts pointed to the continuous and increasing decline of the Russian armed forces in Ukraine as the invading army continued to incur losses. But last Tuesday’s US inflation numbers for August changed the rules of the game while Thursday and Friday reminders to the market, from European Central Bank policy makers, that there could be more rate hikes ahead, did little more than simply do to help stabilize the currency.

In this regard, ECB Vice President Luis de Guindos told Expresso: “We are not targeting the exchange rate, but it is something we are looking at very carefully. The depreciation of the euro had a negative impact on the cost of energy in the euro.” “Further depreciation of the euro could be detrimental to inflationary pressures. Conversely, if the euro stops falling, this could be positive and support the fight against inflation. I hope that the trend of the recent decline will be reversed in the near future.”

“More hikes may come in the next few months” but that will depend on economic data emerging from the eurozone, de Guindos of the European Central Bank explained, acknowledging that bringing the double-digit inflation rate back to its target could have a cost for European economies. These comments were an expanded version of those made by President Christine Lagarde at his September policy briefing and were similar to what was said last Wednesday by European Central Bank chief economist Philip Lane, who addressed the Money Market Contact Group meeting.

“Based on our current assessment, we expect this transition to require us to continue raising interest rates over the next several meetings,” he said. This policy path will dampen demand and protect against the risks of a continuing upward shift in inflation expectations. We will regularly reassess our policy course in light of the incoming information and evolving inflation expectations.” “At the same time, it is quite clear that appropriate monetary policy for the eurozone must continue to bear in mind that the energy shock remains the dominant driving force of inflation dynamics and general economic prospects, including through the effect of a significant deterioration in terms of trade,” he added.

The Euro rose tepidly back to parity after the above notes and showed resilience to an overly strong dollar but is likely to take its cues this week from European Central Bank President Christine Lagarde’s speech, Wednesday’s Fed decision and the release of S&P surveys. Poor’s Global Purchasing Managers Friday.

Will the Fed raise rates?

Overall, almost all forecasters expect the Fed to raise the US interest rate by 0.75% to 3.25% today, and pricing in the interest rate derivatives markets indicates that the decision is a dip between a 0.75% increase and an exceptional 1% hike, which will take the top to the end of the fed funds rate range to 3.5%.

This comes after US data showed on Tuesday that overall and core inflation rates accelerated on a monthly basis in August. The tee forecast assumed that inflation would be in the midst of a clear and unmistakable decline. Analysts suspect that the Fed will do something different than the market imagines, however, by raising interest rates directly to whatever “final rate” is currently estimated, as this would be more in line with various officials who recently cited the 1980s Fed. With President Paul Volcker’s approach as a model for dealing with inflation this would mark a choppy end to the interest rate cycle, though, something that could see the market rethink speculative bets on the dollar with very positive implications for the euro.

Forecast of the euro against the dollar today:

There is no change in my technical view, nor in the performance of the EUR/USD currency pair until the reaction from the US Federal Reserve’s announcement today. 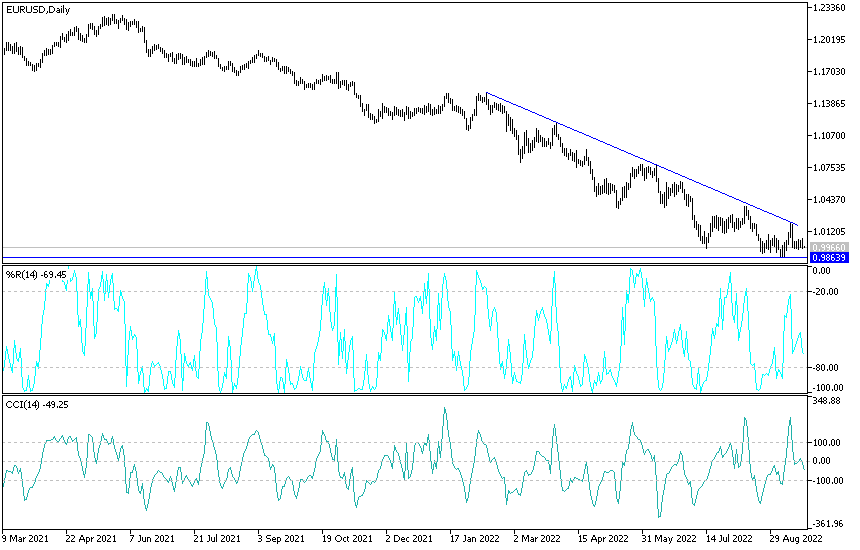