My previous EUR/USD signal on 19th September produced a losing short trade from the bearish rejection from the resistance level which I had identified at $0.9993.

Trades may only be taken before 5pm London time today.

The best method to identify a classic “price action reversal” is for an hourly candle to close, such as a pin bar, a doji, an outside or even just an engulfing candle with a higher close. You can exploit these levels or zones by watching the price action that occurs at the given levels.

In my last analysis of the EUR/USD currency pair on 19th September, I thought that if the price could get established later below $0.9930, that would be a very bearish sign and suggest that a strong breakdown would finally be underway.

I was looking for a short trade from a rejection of $1.0032. This did not happen during the London session, but during the later Asian session the price rejected the level just 4 pips above that, and then fell by another 500 pips over the next days, so I was on the right track.

Since then, we have seen a lot of movement in both this currency pair and in the GBP/USD currency pair. This pair fell strongly to almost reach $0.9500, a near 20-year low price, before rebounding very strongly over the past week or so. This bullish price movement peaked just below the parity level yesterday and on Tuesday.

The US Dollar had been advancing very strongly but ran out of steam on increasing speculation that the US Federal Reserve will be forced to moderate its recent hawkish tilts on monetary policy. It is debatable whether the market really believes in this, and it may be true that the price just peaked naturally below parity. Technically, we see a second lower high just below the key resistance level at $0.9930, and the price has been falling from that area over recent hours as the US Dollar begins to strengthen again.

I think the price is beginning to consolidate, and the two levels to watch as extremes of the natural currency range are $0.9930 as resistance, and $0.9847 as support. I am ready to trade a reversal following a rejection of either level.

Regarding a potential breakout, I see very little chance to the upside – if there is a breakout, it will very likely be a breakdown below $0.9847, as the price will have considerable room to fall. Therefore, I will also consider entering a short trade if we get two consecutive lower hourly closes below $0.9847 today. This is very unlikely to happen today but might happen tomorrow. 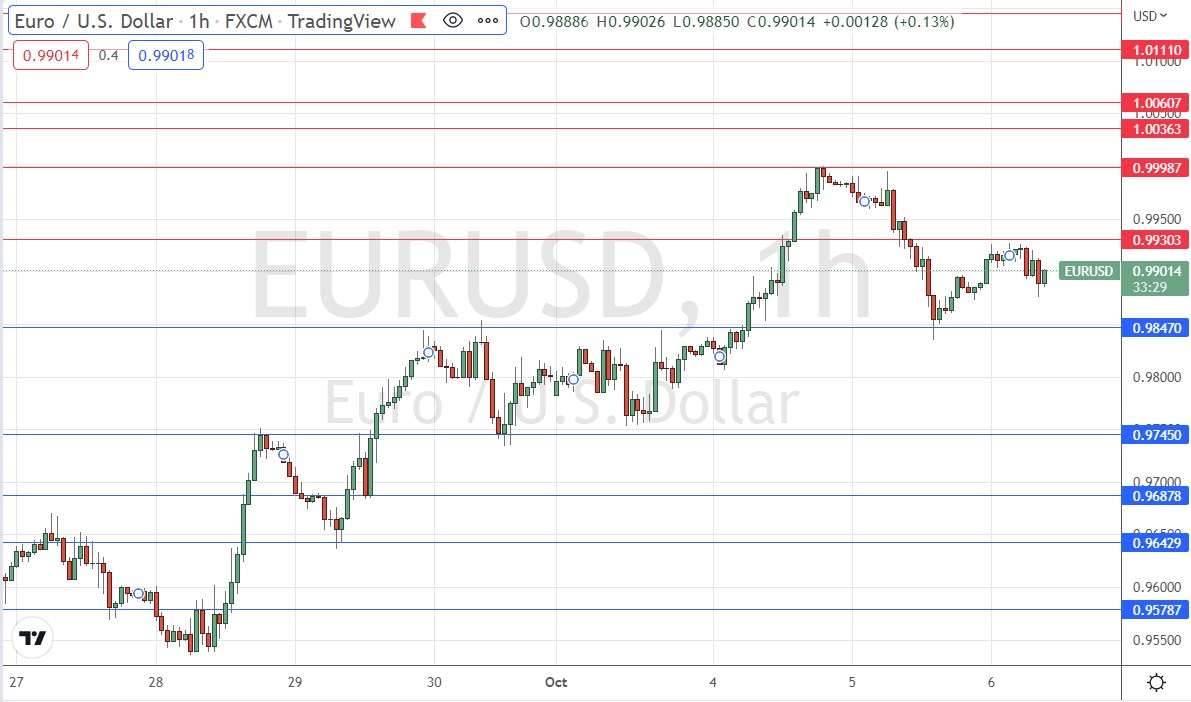 There is nothing of high importance due today concerning either the EUR or the USD.

Ready to trade our free Forex signals? Here are the best Forex brokers to choose from.