The GBP/USD exchange rate fell to new lows in forty years at the opening of a short week due to the holiday. It could head towards some exceptional volatility including a possible mid-week rally by the pound as well as a pullback of the “Thursday” pattern Black” towards its lowest levels from 1985.

The GBP/USD pair fell towards the 1.1300 support level today, before settling around the 1.1340 level at the time of writing the analysis, as markets and investors await the US Federal Reserve’s announcement today and tomorrow, the Bank of England’s announcement.

Inflation has not peaked yet

This can lead to higher volatility from the midweek session regarding the inclusion of a possible sharp corrective rally by the GBP towards 1.20 and possibly a sharp drop following the BoE’s decision on Thursday.

Last week’s US inflation data may have been a game changer for FOMC members, many of whom have recently expressed evaporation of tolerance for high inflation and risks associated with the medium and long-term inflation outlook. The data showed both headline and core inflation accelerating month-on-month in August and at a time when Fed forecasts assumed inflation would be in the midst of a clear and unmistakable decline.

This raises questions about how the Federal Reserve can do anything other than raise US interest rates much more than it has done so far in the session on Wednesday, and about the potential impact of this on the dollar and the British pound.

Almost all forecasters expect the Fed to raise the US interest rate by 0.75% to 3.25% today while pricing in the interest rate derivatives markets indicates little possibility that the bank will raise its benchmark borrowing costs with an exceptional 1% increase.

In contrast, inflation near double-digit percentages is a large part of the reason many economists expect the Bank of England to raise its bank rate either 0.50% or 0.75% tomorrow, Thursday, in a policy decision likely to affect the pound if the market reacts. Analysts suspect that the Bank of England could raise the bank rate by at least 125 basis points to 3%, but that this will not serve the pound, in part because the decision will leave UK government bonds with very negative inflation – adjusted yields at a point at which government spending is about to increase significantly.

Disappointment continues to negatively affect the sentiment of forex traders who want to capture the sterling from this level. According to the performance on the daily chart, the current descending channel will not be broken without moving towards the 1.2000 level.

Currently, the closest support levels for Sterling are $1.1300, 1.1245 and 1.1100, respectively. Be careful not to take risks when thinking about buying sterling. 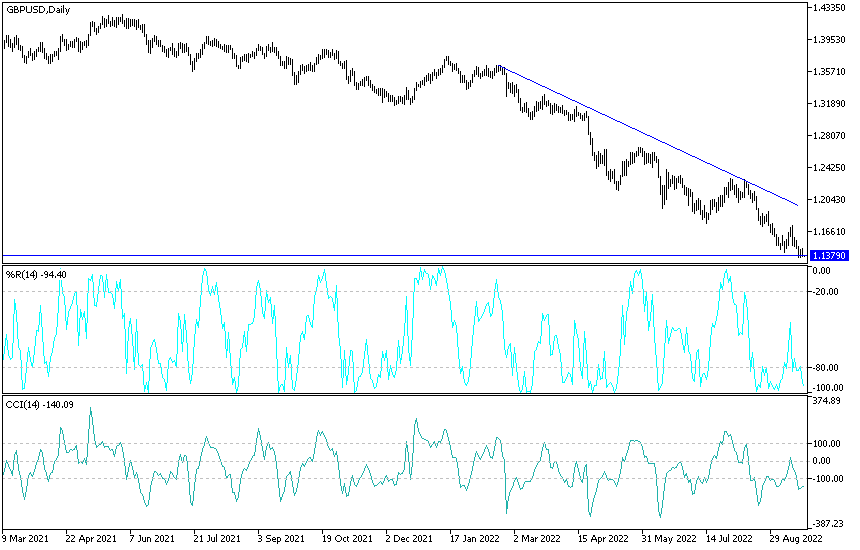 Recovers After Initial Plunge Against the