Private payrolls grew by 208,000 in September, compared to an upwardly revised 185,000 in August. Market expectations were for an estimated increase of 200,000 jobs.

The Dow Jones Industrial Average declined in its recent trading at the intraday levels, to break a series of gains that continued for two consecutive days. It recorded losses in its last sessions, falling by 0.14%, to lose about 42.45 points to settle at the end of trading at 30,273.88, after rising 2.80% in Tuesday.

The ADP’s national employment report on Wednesday showed that US private sector employers ramped up hiring in September. This suggests that higher interest rates and tighter financial conditions did not curb demand for labor as the Federal Reserve battles high inflation.

Private payrolls grew by 208,000 in September, compared to an upwardly revised 185,000 in August. Market expectations were for an estimated increase of 200,000 jobs.

The Institute for Supply Management’s services index fell to 56.7 in September from 56.9 in August, but it beat the consensus on Econoday with an estimated reading of 56. There were declines in new orders and production readings, while the employment reading rose.

Meanwhile, San Francisco Fed President Mary Daly told Bloomberg TV in an interview that inflation is a problem, and that the US central bank will continue its course. “The path is clear: We’ll raise rates to a restricted area, and then keep them there for a while,” Daly added. “We are committed to lowering inflation, staying on track until we get really good.”

Therefore, our expectations indicate a further decline for the index during its upcoming trading, especially if its stability returns below the 29,653.30 support level, to target the 28,402.50  support level after that. 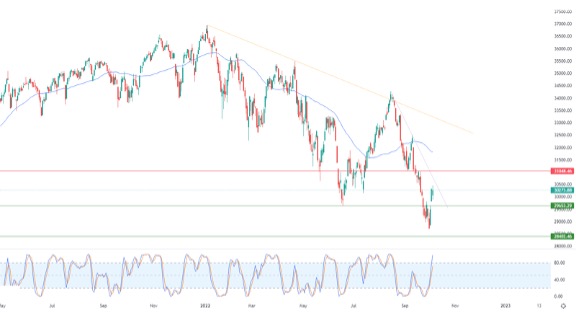 Ready to trade our Dow Jones trading predictions today? Here are the best CFD brokers to choose from.

Prices may Give Up Bullish Trend

Whipsaws Ahead of US PCE Data