The Australian economy is quite a bit different than other economies now because something like 40% of GDP is tied to the housing market.

The Australian economy is quite a bit different than other economies now because something like 40% of GDP is tied to the housing market. This means that Australians cannot raise rates in the same aggressive manner that many other central banks will. This is especially true when it comes to the United States, as the Federal Reserve must fight inflation. At this point, I continued to fade rallies in this market, and if we could breakout to the upside, I think it’s even more interesting if we get to the 0.67 level.

Looking for Opportunities to Short This Market

The 0.67 level had been major support previously, so a bit of “market memory” could come into the picture if we rally, and I suspect that would be an excellent selling opportunity. That selling opportunity is something that I will take advantage of and start shorting it again. If we break down below the bottom of the range over the last couple of training sessions, then I think it’s very possible that the Australian dollar could trade down to the 0.63 handle. In general, this is a market that I think will continue to be very noisy, but the US dollar is by far my favorite currency now.

This is not to say that it won’t eventually change, and I do believe that eventually the Australian dollar, Euro, and the British pound will all be excellent buying opportunities. Looking at the start, I think it’s only a matter of time before the sellers come back in, but do not be surprised at all to see a short-term bounce. After all, markets remain volatile, and of course, the Aussie dollar is a situation where you have commodities, Asian, and a housing market that come into the picture. 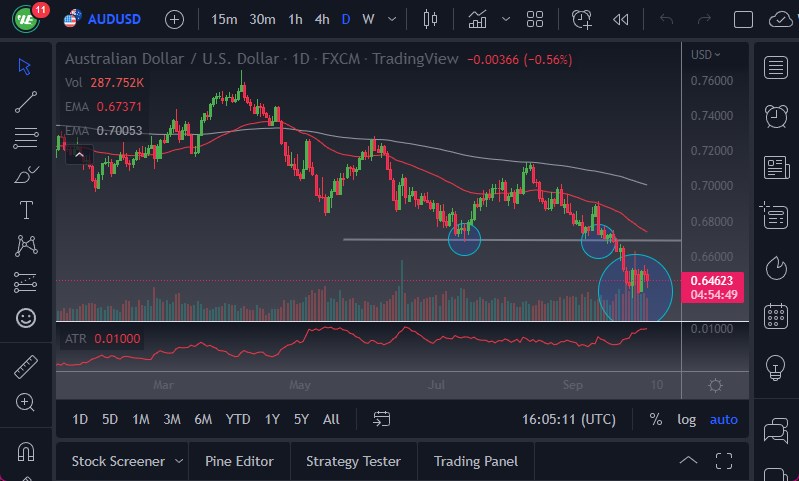