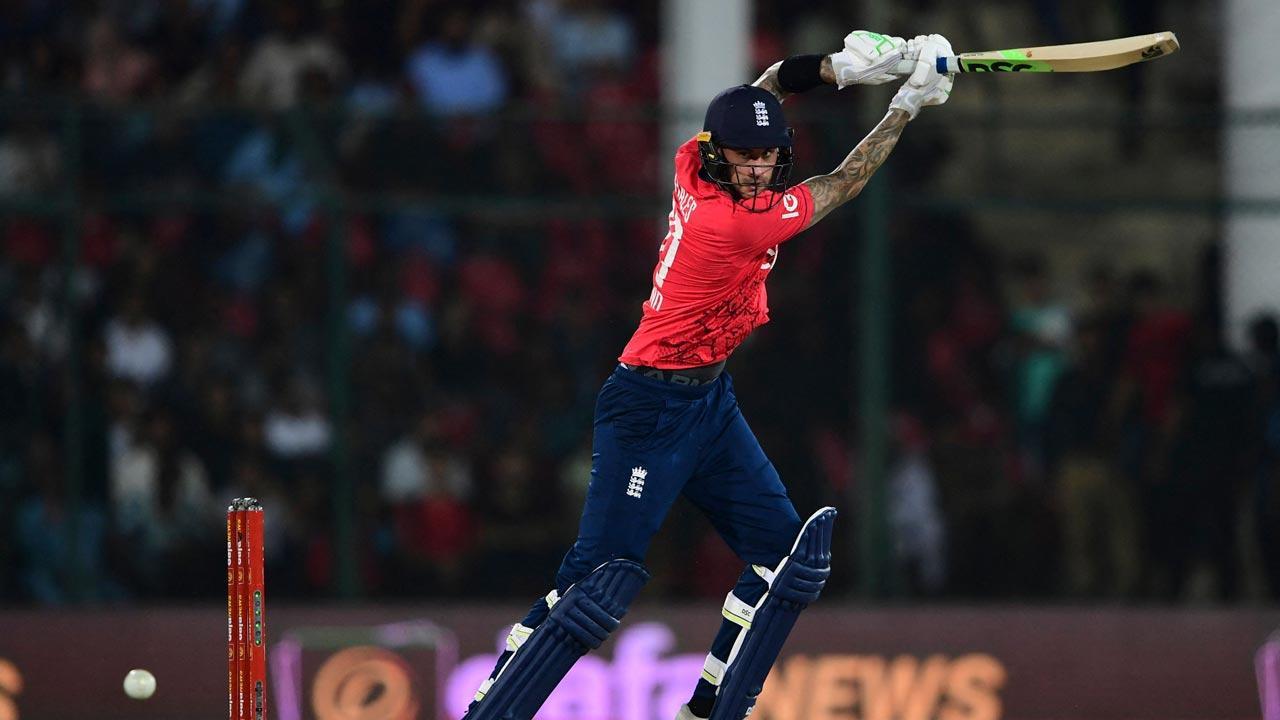 England opening batter Alex Hales, returning to the side after more than three years, blasted a half-century as the visitors defeated Pakistan by six wickets with four balls to spare to take a 1-0 lead in the seven-match T20I series at the National Stadium here. With Pakistan and England priming for the ICC T20 World Cup 2022 in Australia, Hales` stunning return to the international game — aided by seven boundaries — and Harry Brook`s hitting at the back end, helped England overhaul Pakistan`s 158/7 in 19.2 overs.

With Hales giving a superb account of himself in just his maiden outing for England in three-and-a-half years, the opener could well be a key player in their campaign in the T20 World Cup 2022 next month. The opener moved England to 47/1 from the powerplay with Phil Salt (10) and Dawid Malan (20), and pushed along all the way until the 17th over, where he eventually fell to Haris Rauf.

Replacing Jonny Bairstow in the T20 World Cup 2022 squad after his freak injury, Hales, who boasts extensive domestic experience in Australia (Big Bash League) and Pakistan (Pakistan Super League), now should lead England`s tournament charge opening the batting. Pakistan, on the the other hand, were once again troubled by their lower-order batting, which again failed to fire, though the openers looked reliable. At 87/1 at the halfway mark, the platform was set for a total of 175 or more, only for a second half of 71/6, which left the host with a below-par 158.

Babar Azam`s side scored just 38 in the final five overs, with the loss of Mohammad Rizwan (68 off 46 balls) in the 15th over preventing a late onslaught. Iftikhar Ahmed (28 off 17 balls) tried his best, though couldn`t find a partner to join him, as Shan Masood (7), Mohammad Nawaz (4) and Khushdil Shah (5) went cheaply.

Asif Ali`s heroics at last year`s T20 World Cup 2022 are fresh in the memory, though it remains unclear who will be trusted at the death in next month`s tournament. Playing his fifth T20I, Harry Brook enjoyed his best outing so far for English, making an unbeaten 42 from 25 balls, and steering his side home in the final over. Brook looked arguably the most comfortable of the English batters on the Karachi surface, hitting seven boundaries, the last of which sealing the game.

The No.5 joined Hales with England needing eight runs per over, and showed maturity that belied both his age and experience, bringing the required rate down gradually in a calculated manner.

Alia, Ranbir Kapoor And Others In Fam-Jam Pic From Mahesh Bhatt's Birthday

Shikhar Dhawan Confident India Will Bounce Back In Bangladesh

Mukesh Kumar Grabs Six As India A Dismiss Bangladesh A For 252, Umesh Yadav Warms Up For Tests With Twin Strike