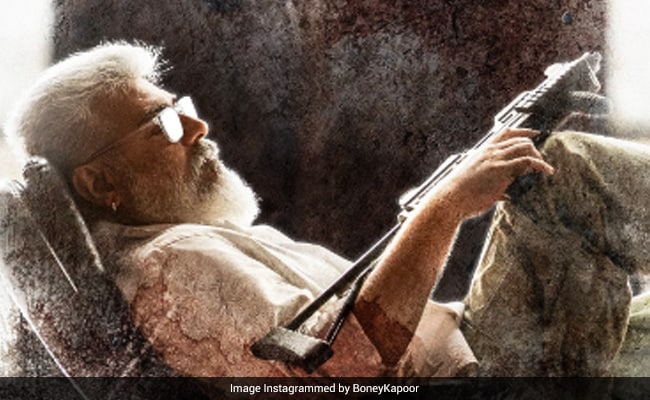 The makers of Ajith Kumar’s 61st project, revealed the film’s title and first look on Wednesday. The film is titled Thunivu. Boney Kapoor, who is also producing the film, shared the film’s first look on Twitter. He used the hashtags Thunivu, No Guts No Glory, AK61 First Look and AK61 as his caption. The film will mark the third collaboration of the actor-producer duo after the 2019 film Nerkonda Paarvai and the 2022 film Valimai. Both the films were directed by filmmaker H Vinoth, who will also be directing Thunivu.

Big Day for Ajith fans globally! Huge congratulations and all the best to the team @BoneyKapoor@ZeeStudios_pic.twitter.com/D57TMLkPPN

In April, H Vinoth shared a picture of himself with producer Boney Kapoor on his Twitter handle. In the picture, Boney Kapoor can be seen holding Thunivu‘s clap board. Sharing the picture, the filmmaker wrote, “Padum Pesum! That’s it… #AK61 begins” with two fire emojis.

Boney Kapoor too shared the same picture on his Instgaram handle and wrote, “Here’s to another Ajith Kumar action adventure! The shoot for #AK61 has begun!”

The actor-producer-filmmaker trio in February, released their film Valimai. The film also featured Karthikeya and Huma Qureshi in the pivotal roles. Along with directing, H Vinoth also wrote the film’s script. Valimai opened to mixed reviews.

Thunivu will reportedly release in 2023. Ajith Kumar has not signed any other film as for now.